Booking a hotel in Edinburgh was a challenge – the city being full of secessionists coming from all over the country to attend the big ‘Freedom for Scotland’ rally on Calton Hill.  And so it was that we hove up at the Holiday Inn Express in the delightful little backwater of Leith, almost next door to the Royal Yacht Brittania.  While it seemed at first that we were a long way from Edinburgh center, the Lothian company’s Number 22 city bus stopped at our doorstep every twenty minutes and for a few pounds took us pretty much anywhere we wanted to go and back again. Best of all though the lovely Water of Leith is right around the corner. Leith, on the south shore of the Firth of Forth is the official port for the city of Edinburgh and a very busy one at that. But you wouldn’t know it from the viewpoint of this peaceful and sparkling inner cove. 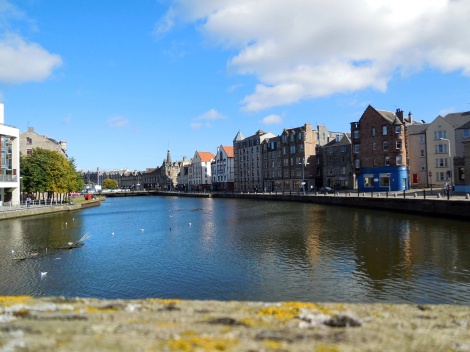 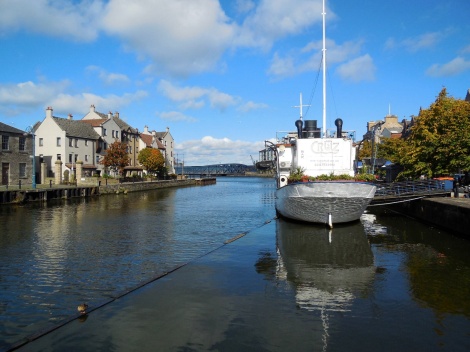 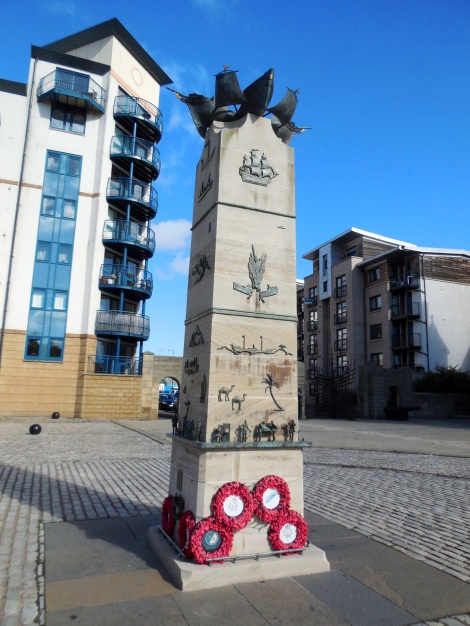 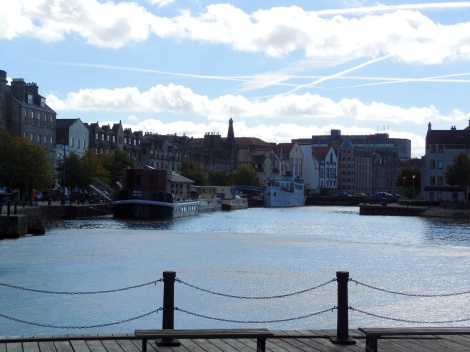 This delightful backwater is refreshingly free of souvenir shops and franchise stores. There are a couple of pubs and restaurants and a killer spot for Sunday brunch called Mimi’s that was lined up out the door shortly after we arrived. I’m sure I could have put on ten pounds just standing near their counter filled with fluffy layer cakes, eclectic slices and exotic tiered puddings. I showed great restraint, I thought by ordering only the full Scottish breakfast, which in the context of everything else seemed ‘lite’. Right.

The royal yacht really is moored across the street from the Holiday Inn – at the new, massive and sparsely populated Ocean Terminal shopping plaza. Britannia has been the Queen’s home away from home since it was built in 1953. It’s owned, however by the British government and when it became apparent in 1997 that it would need serious refit or replacement the ruling Labour government decided to de-commission it. Tough economic times for most Britons made it politically incorrect for the Royal family to object but the Queen is said to have wept at leaving the Britannia for the last time. It was one place where she could truly relax, to her children and their children the ship was a family home, and many important dignitaries had the pleasure of being hosted on this spectacular yacht. Britannia logged over a million nautical miles and almost seven hundred official foreign visits before she was retired.

These are the comfortable lounge and dining quarters of the Royal Yachtsmen. The crew were like family to the Queen, with many if them serving out their entire careers on board the ship. 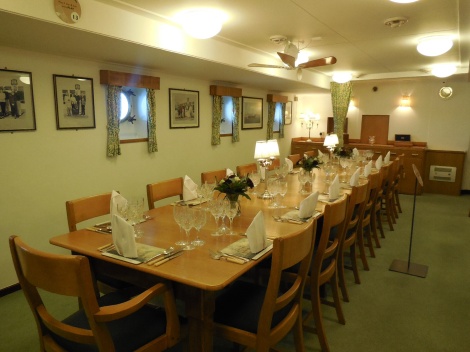 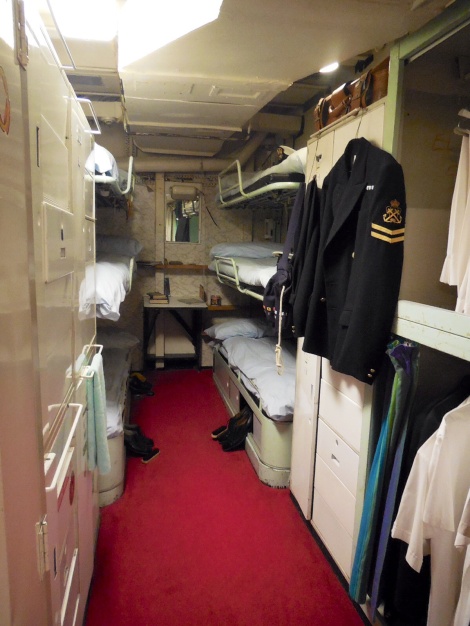 And these are the somewhat more comfortable formal sitting and dining rooms for the Royal family and their guests, and the Queen’s study. Sleeping quarters for the royals were on the deck above this one that has not been made open to the public – except for a large room at the stern of the ship that was once the Queen’s bedroom but that is now a public tearoom. So one can actually claim to have had tea in the Queen’s bedroom. Sort of. 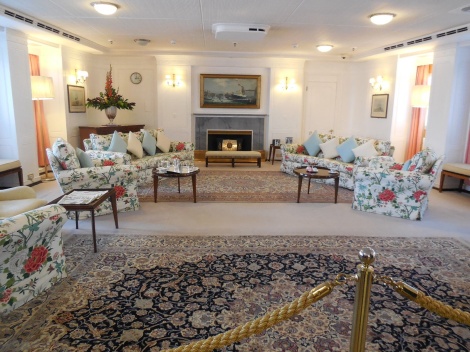 The working end of the Britannia includes a fully equipped surgery (the ship was actually designed to be converted into a hospital ship, if needed but the need never arose), crew quarters and a fully equipped laundry to ensure a sharp crease in the royal linens, and of course there is a garage on deck for the royal Rolls. 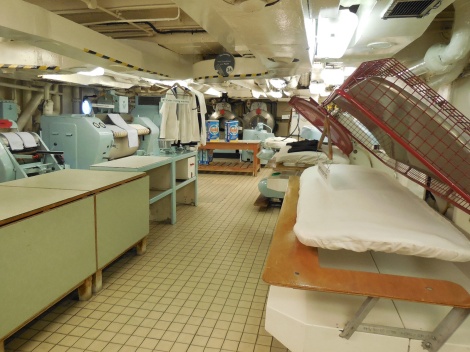 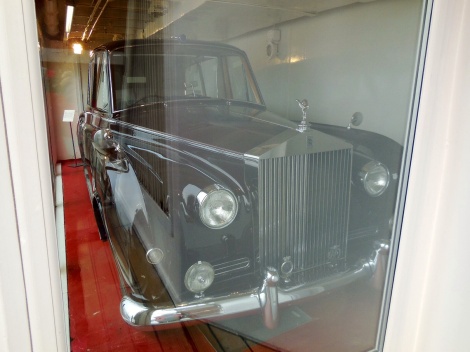 Our tour of the Britannia made us long for the sea so we went off to North Berwick for a day at the beach. Berwick (pronounced like ‘barrack’) has been a working harbor since the twelfth century but today it’s mainly a beach and golf resort that attracts the occasional celebrity to its lovely seaside homes and cottages. 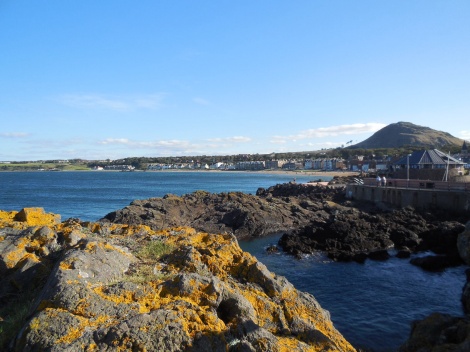 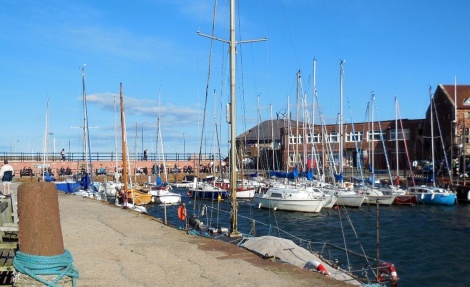 A chunk of volcanic rock known as The Bass sits a couple of kilometers off the beaches of North Berwick. This is a privately owned island that at various times has had it’s own castle, lighthouse and in earlier years it’s own hermit but these days is mostly a large and striking gannet colony.

We are off again after our beach day, across gorgeous Scotland by train through Glasgow and then south to the island of Anglesey, Wales via Chester, England. Three countries in one day – I’m exhausted already. Stay tuned!