If you were around in the mid-1800’s and were drawn to one of those “Ten Most…” lists in Time magazine then you might be familiar with Cardiff’s John, the Third Marquess of Bute who, having inherited the family fortune and coal exporting business, topped the list for a time in the 1860’s as the Richest Man in the World. Granted, the world was much smaller in those days and this particular list may not have been entirely accurate, statistically speaking. But at any rate, the Bute family did not want for much and happily for us John chose to spend some of his disposable income on renovating and redecorating the family home. After several hundred years it was in need of a little fix up. John partnered with the English architect, William Burges and the result is the seriously gorgeous and gloriously over-the-top Cardiff Castle. 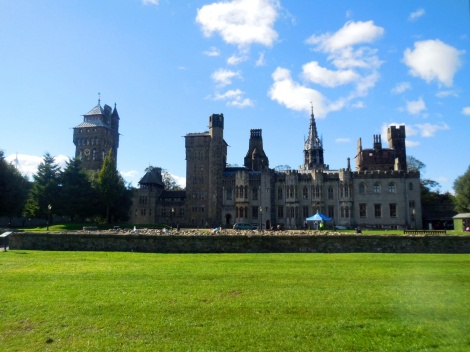 We’ve donned our hats and gloves, and with handbags looped over our arms we’ve come calling in anticipation of taking tea with the Bute progeny. But it’s not to be. When the Third Marquess died at the young age of fifty-three his son, Marquess the Fourth completed the makeover, and when he died the family generously bequeathed the castle and surrounding lands to the City of Cardiff. 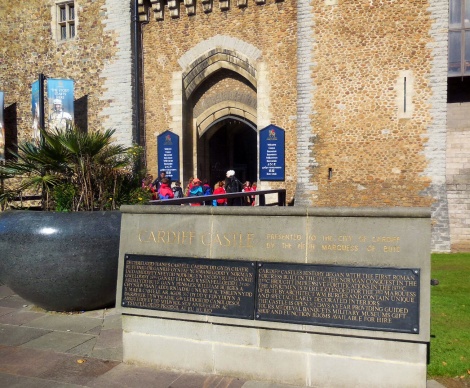 The whimsical Clock Tower with it’s life-sized statues was built by none other than Edward Dent, who built that other little time piece – Westminster’s Big Ben in London. The mechanism remains in full working order, ticking away the seconds since it was first opened in 1874.

The castle had humble beginnings around the year 50 AD when Romans first established an outpost on the strategically important Bristol Channel. The fort was replaced sometime around 1100 AD by the Normans who built this Keep on the same site. 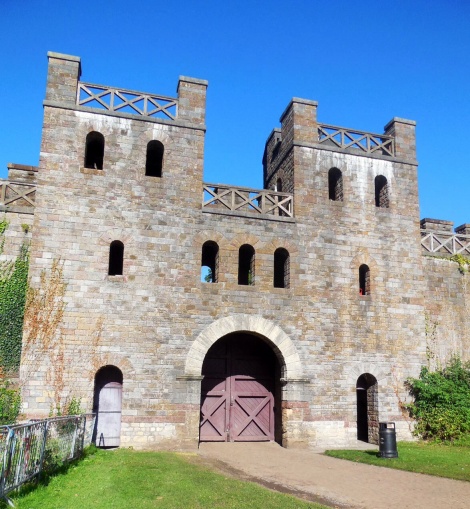 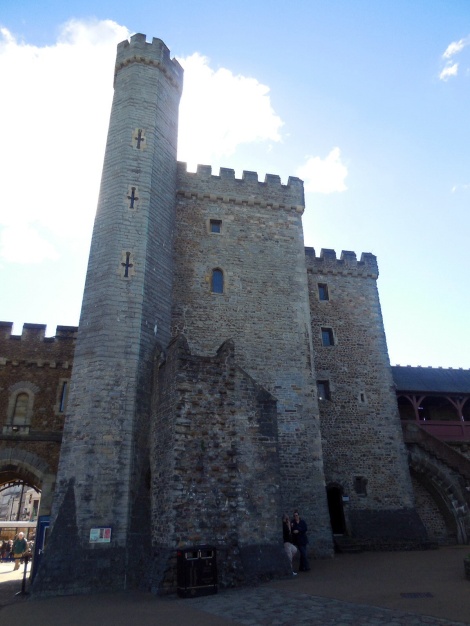 To relieve over-crowding in the Keep it was decided to build formal lodgings, just west of it for the Knights and their retinues. Begun in the 1400’s the lodgings have undergone several expansions and renovations since, but none so grand as those undertaken by the Third Marquess. In partnership with Burges, the Marquess set out to not only expand the already-quite-grand castle but to transform it into a positive feast of extravagance, described on the Cardiff Castle website as a ‘Neo Gothic dreamland’. 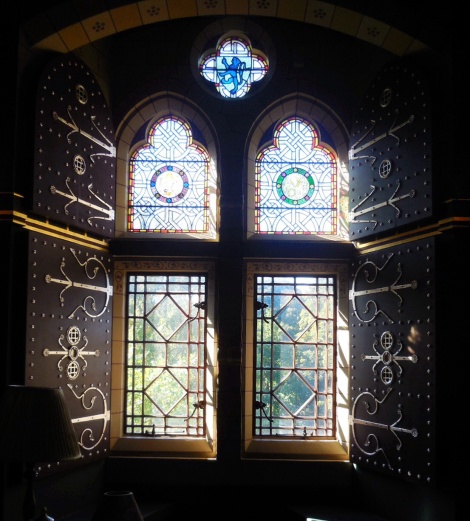 The design throughout the castle is so ornate that it’s hard to focus on any single aspect but the ceilings alone would make for a wonderful coffee table photo album. This is only a small sample of the delicious treatments that soar high above every room in the castle. The ceiling at top left in this montage depicts the signs of the Zodiac as they were known in those times. 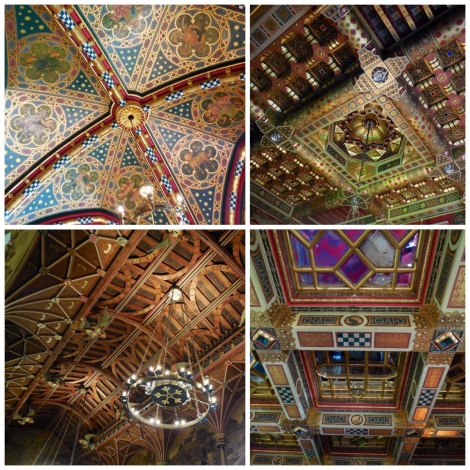 William Burges was considered one of the greatest of the English art-architects and his remarkable vision is everywhere in the castle, and in the gorgeous and colourful wall murals in almost every room. Many of the murals depict historic events and people while this one in the nursery illustrates the heroes and villains of fairy tales.

If this bed seems incongruous with the Marquesses bedroom it’s because it’s not the original one, which would have been much, much more grand. The en-suite bathroom remains much as it would have been in the Marquesses day, and appears to be remarkably well-equipped and functional. It’s not entirely clear where the state-of-the-art toilet empties to but I doubt that the Marquess lost much sleep thinking about it. You can look for this photo to turn up again when I write my ‘Toilet’ post. 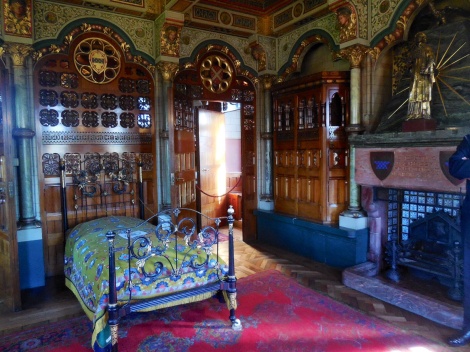 When life gives you coal…you build fireplaces. And what fireplaces they are! A focal point of every room, Burges really went to town on these spectacular alternatives to central heating, indulging to the max the Victorian tastes of the day while incorporating historical events, both fact and legend, into his designs. Each fireplace tells a different story and many are embellished with popular quotes, including “Love conquers all…”. 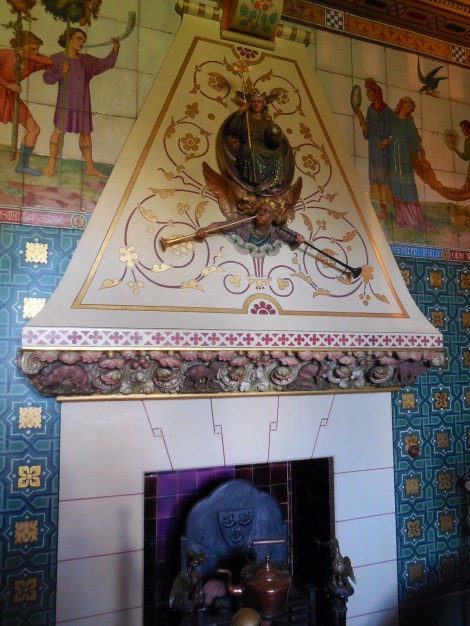 ‘Spa’ is one of my five favourite words – along with ‘valet’, ‘martini’, ‘latte’ and ‘taxi’ – and this roof-top garden and spa inspired by the Marquesses travels abroad seems like a magical place to indulge in a little hedonism – tempered perhaps by the delicate mosaic illustrations of the First Testament that adorn the walls. The area is open to the sun and stars above and the green shutters also open up to the outdoors. Exotic animals embellish the planters and fountains, a testament to how well-travelled and informed was the Third Marquess of Bute. 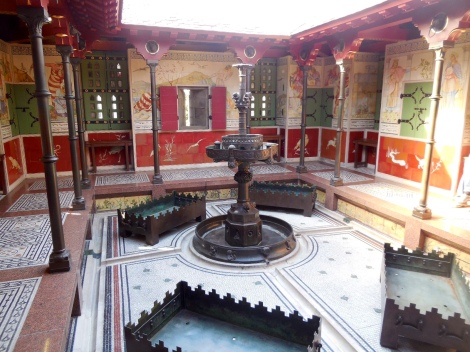 It’s remarkable that Cardiff Castle survived the ravages of World War II as well as it did. Cardiff was bombed repeatedly between 1939 and 1944 in order to disrupt coal distribution to Allied forces. It’s said that more than 2100 bombs fell on the city. The most significant changes to the castle during that turbulent period are the air raid shelters constructed under the perimeter and the access holes knocked in the castle walls. Barrage balloons were flown above the castle grounds on metal cables to deter low level aircraft. They seem to have worked, as there is no record that I can find of significant damage to Cardiff Castle. These shelters were considered the safest in the Cardiff area because of the earth embankments surrounding the castle. 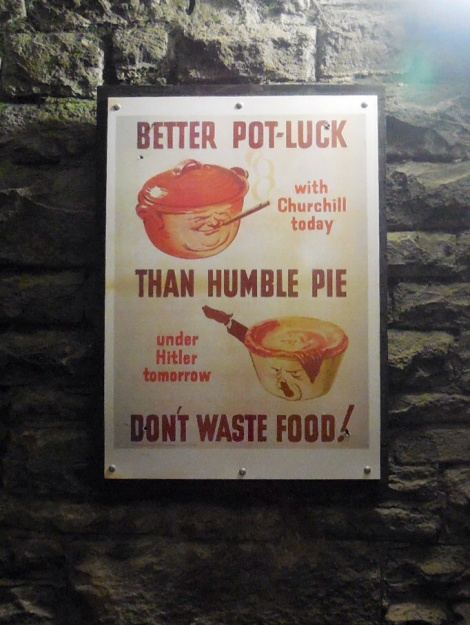 These images of the damage to Cardiff during WWII are posted on the stone walls of the dark, narrow hall through the shelters. Some 355 residents of Cardiff lost their lives during The Blitz, including entire families found huddled together in bombed-out shelters. 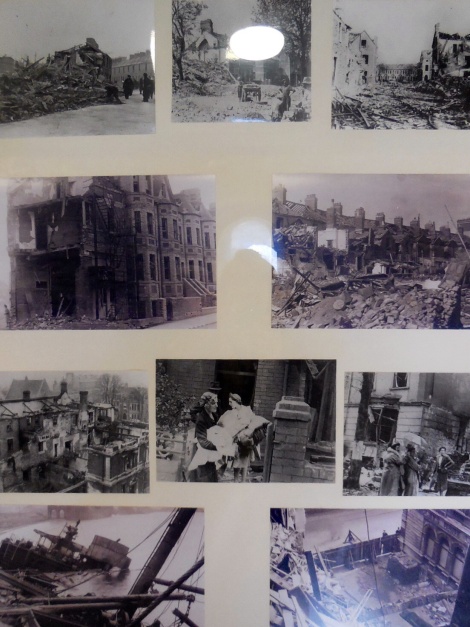 This is our last taste of Cardiff before continuing on our adventure, and also a reminder of the importance of coal to the economy of Wales, then as now. The city is littered with trendy coffee shops – we tried most of them – and we got a kick out of a ‘pop-up’ quilters group who occupied an otherwise-vacant retail space, camping out with their baskets of bits and bobs, and inviting passersby to “Come on in and stitch awhile!” Seriously friendly folk, these Welsh. I miss them already. 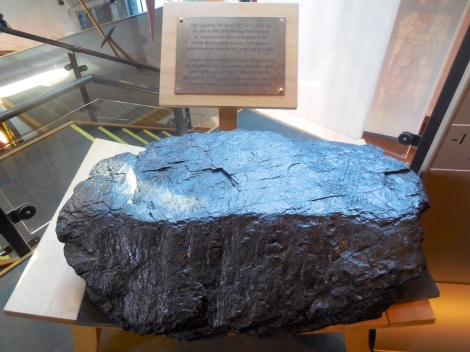 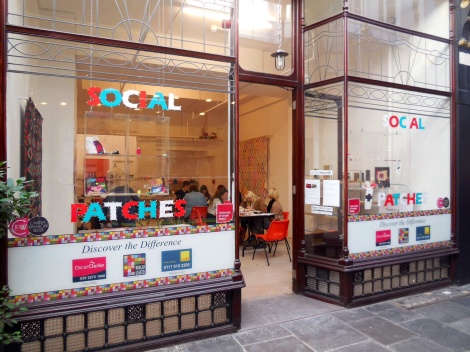 Between our respite on Swansea, our discovery of Tenby and our unplanned sojourn in Cardiff we have lingered longer in Wales than planned… but with no regrets whatsoever. How can you not spend as much time as possible in a country who’s national beer is called Brains? Really. And it’s a wonderful place. But we are off again tomorrow to meet some Village People in a very, very small place in the south of England that we hope is somewhere near an even smaller place called Compton. Stay tuned!