It’s a short three hour train ride from the east coast to the west coast of Ireland, through lush fields and past quaint towns and villages. It’s said that even from space Ireland looks green and I believe it. Oddly, the country is short of trees. It surprised me to learn that Ireland is one of the least forested countries in Europe, and that the Irish government sponsors a program to get farmers and large tract owners to plant trees. 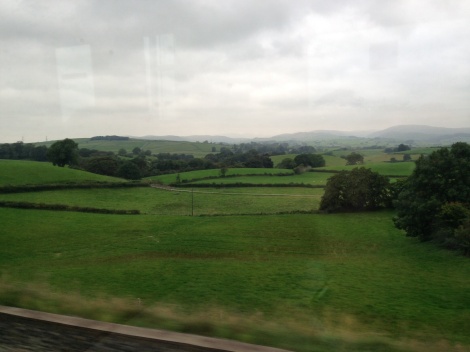 The village of Woodlawn briefly caught my attention as we passed. This tiny burg seems to have only one or two streets but, there being no attendant at the little train station, this helpful map is posted to aid…tourists? 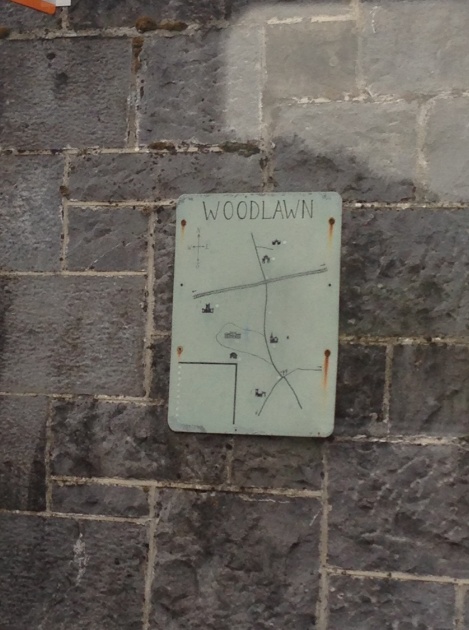 Claddagh in the Gaelic language means ‘stoney shore’ and it’s the completely appropriate name of the iconic fishing village at the mouth of the Corrib River in Galway. The original thatch-roofed dwellings in this village, which once had it’s own King, were destroyed by fire in the 1930’s and replaced by these colourful council houses. 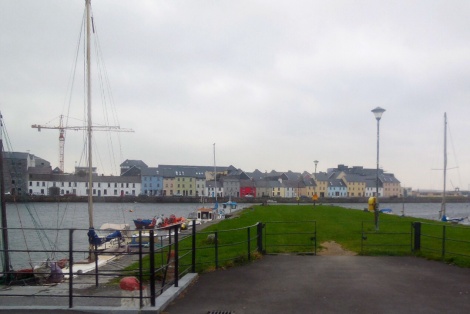 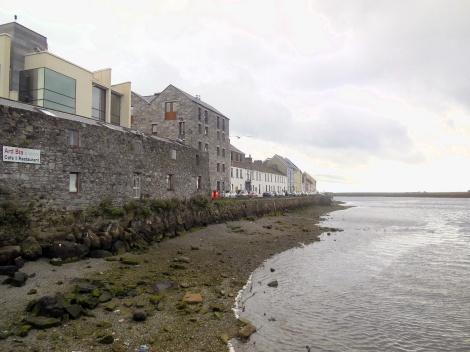 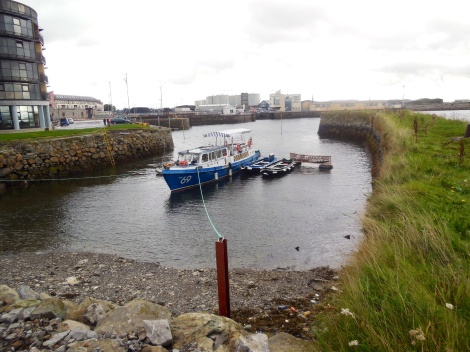 These unique boats, called hookers once plied the coast of Ireland bringing peat from other parts of the country so Galwegians could heat their homes. Peat is dug out of loamy ground, of which County Galway has very little, and it looks a bit like foot-long logs of sod. With the rising cost of oil, the use of peat for heating is actually increasing. 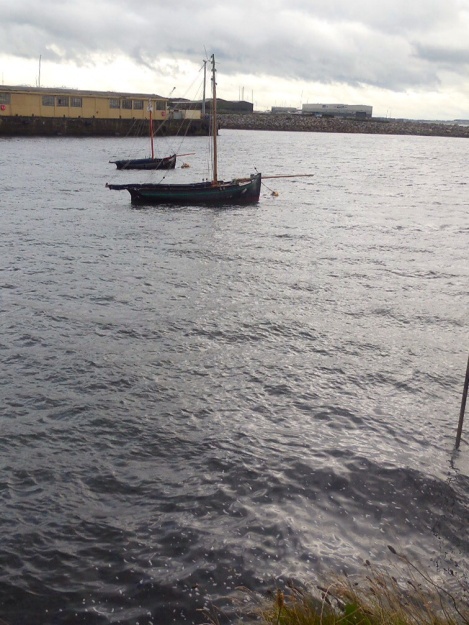 The Spanish Arch is an extension of the walls built around 1584 that once protected Galway from invasion. They were less effective though when it came to invasion by Mother Nature, as they were damaged extensively by a tsunami following an earthquake off the coast of Portugal in the 1700’s. This is what remains of the Arch. 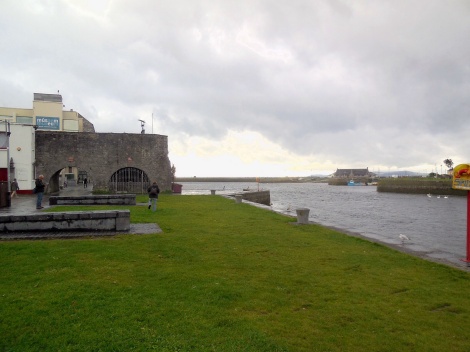 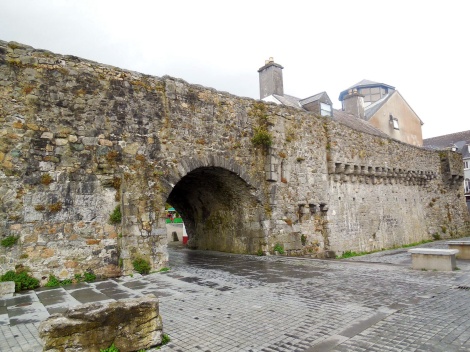 I stood for quite a long time trying to feel inspired by this piece – a gift to Galway from the people of Genoa, Italy. It was given to commemorate the 500th anniversary of the discovery of America by Christopher Columbus, who visited Galway. And it’s apparently a seabird. 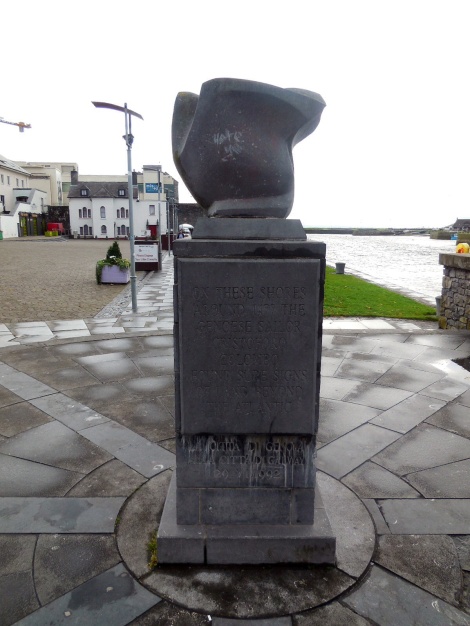 The River Corrib is one of the shortest in Europe, running just six kilometers from it’s lake source into the Atlantic at Galway. It’s a delightful walk from the mouth of the river at the Spanish Arch, along the raised paths on either side that meanders eventually to Galway Cathedral and the picturesque Salmon Weir. 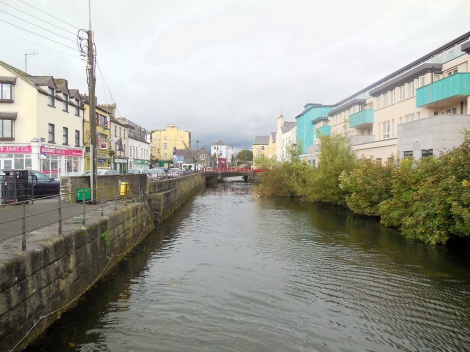 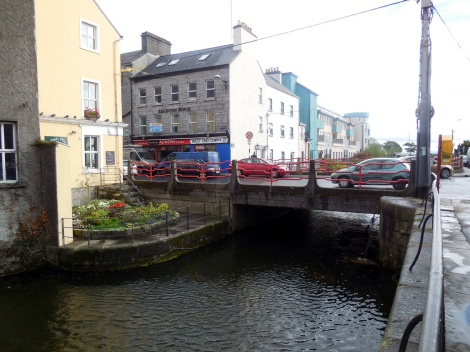 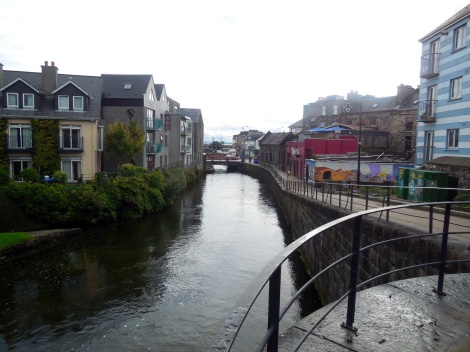 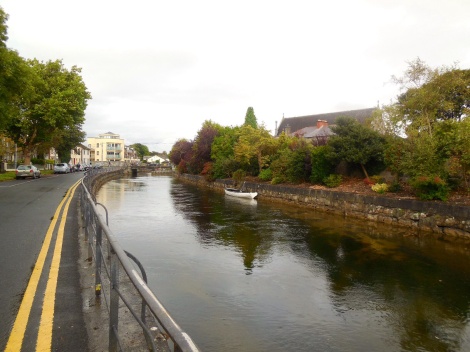 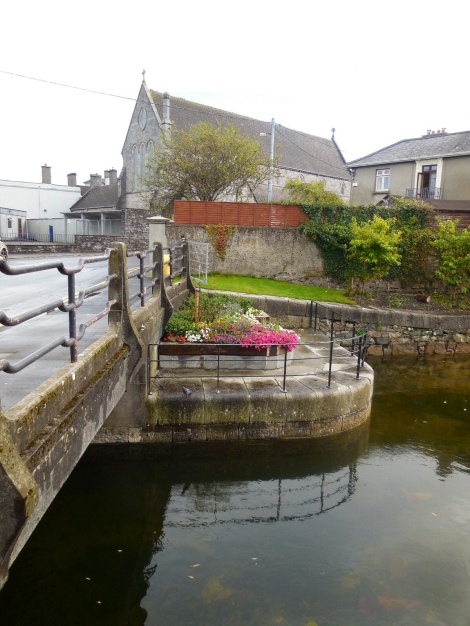 There are two old locks along the Lower Corrib, clearly no longer in use. River traffic came to an end on this short waterway when the original swivel bridges were replaced by fixed spans but it’s a favorite haunt for kayakers who can actually surf at spots along this river when it’s in full flood. 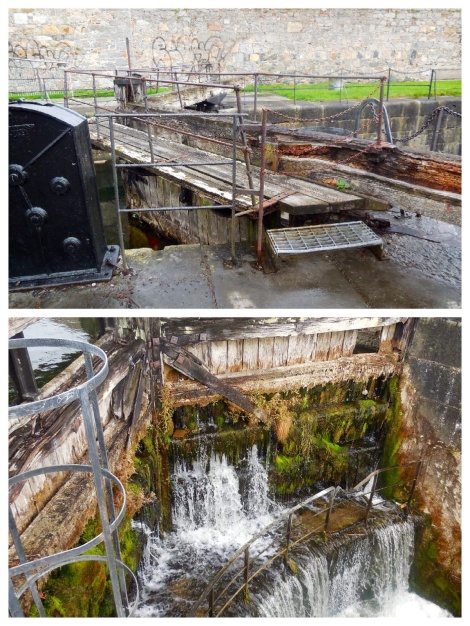 The blue dome just visible over the stone walls along the path belongs to the Cathedral of Our Lady Assumed Into Heaven and St. Nicholas or, as the locals like to call it, Galway Cathedral. Compared to some of the abbeys and cathedrals we’ve visited lately this one is positively new, started in 1958 and dedicated in 1965. Simpler and less ornate than many cathedrals we’ve visited, this one stands out to me for it’s simplicity, it’s use of natural materials and the beautiful light. 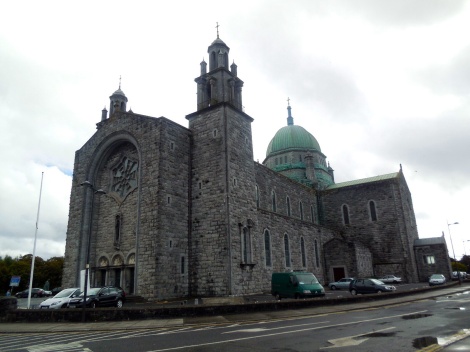 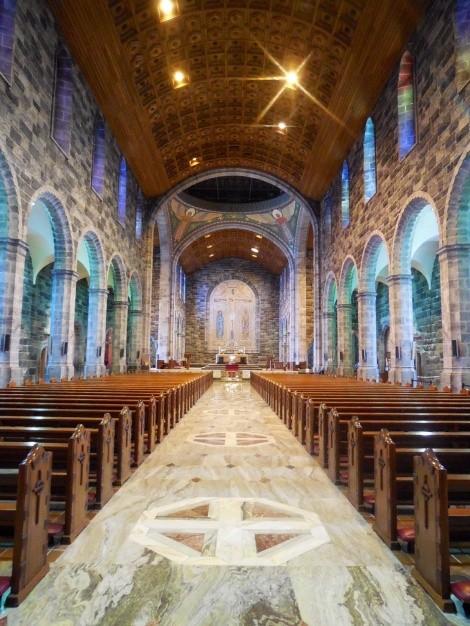 The picturesque Salmon Weir is separates the Upper Corrib, running from it’s origin at the lough and the Lower Corrib running to the sea. To fisherman this is known as the Galway fishery where fly fishing for salmon goes on from February through September. 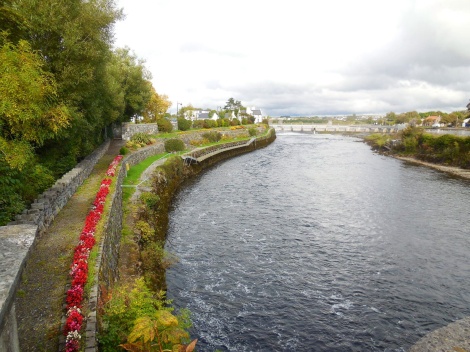 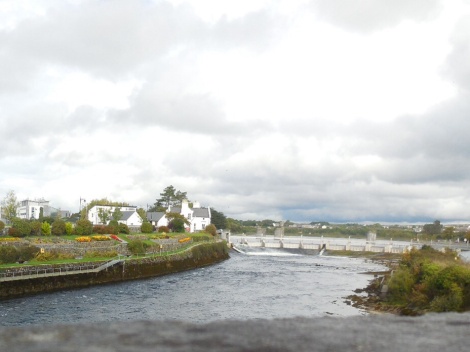 Galway is the forth largest city in Ireland by population with a cozy downtown area of less than a dozen streets, most winding down toward the bay. I love these charming retail areas that we find in every city and village, block after block of entrepreneurial, creative and throroughly entertaining shops and cafes. I know I’ll long nostalgically for them when I’m back home in the land of franchise-filled shopping plazas. Shop Street and the neighborhood around it – just a few blocks really – is a great place to while away an afternoon. We found McCambridges here – a deli and restaurant deliciously catering to the trend in gluten-free eating. I also found a camera store in Shop Street. If you’ve ever tried to find a spare battery for your digital camera you might know that good camera stores are an endangered species. And there are loads of shops selling locally made Irish woolens, and delightful souvenirs and mementos actually made in Ireland. When you are worn out from browsing, the nearest pub is only a few steps away. 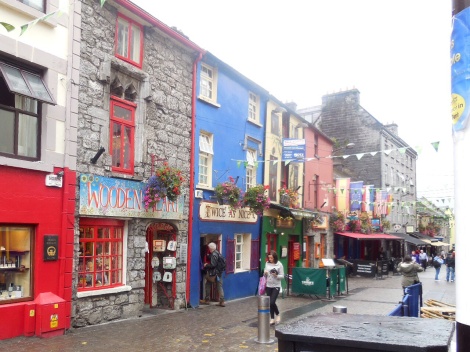 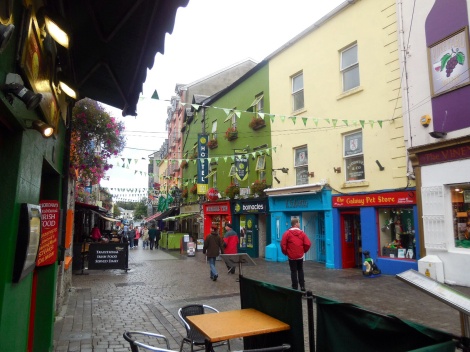 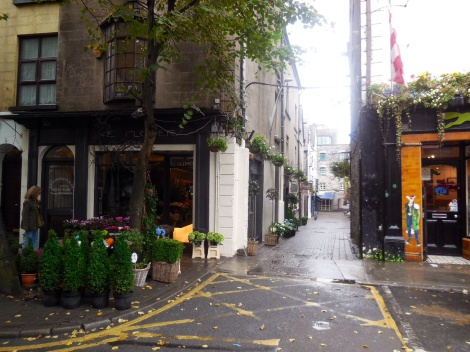 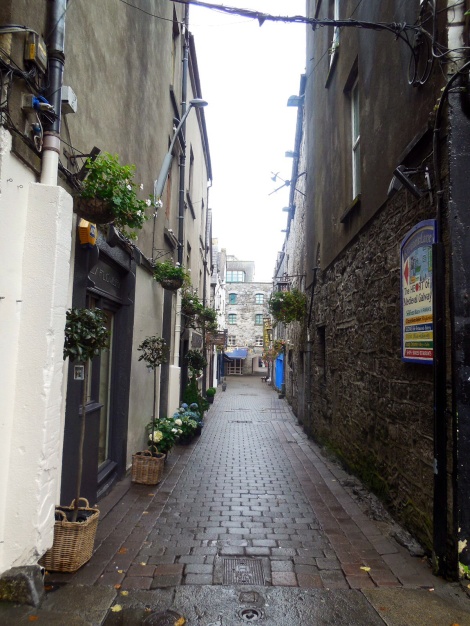 Lynch’s Castle stands out in the center of town on the corner of Shop Street and Abbeygate. It was built by the most powerful family in Galway sometime around the late fourteen or early fifteen hundreds. It’s now the home of a group of Irish banks. I think it must be terribly impressive to have ‘Lynch’s Castle’ as an address on their letterhead. One web site describes the present occupation of Lynch’s Castle by a financial group as a pleasant contradiction of old and new.

The building on the right has no historic significance whatsoever but it does have a great paint job. 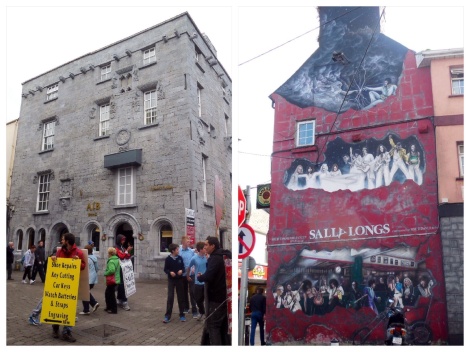 John F. Kennedy visited Galway in 1963 where he made a brief speech in what, at the time was known as Eyre Square. The park at the epicenter of old Galway was re-named John F. Kennedy Memorial Park to commemorate the occasion and a corner of the park is dedicated to JFK. 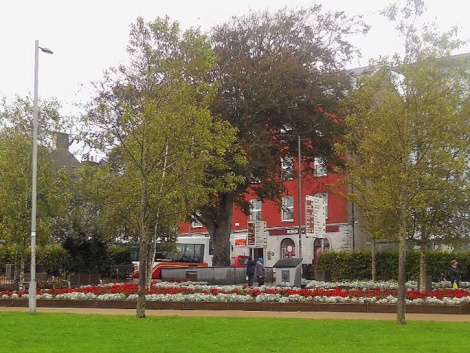 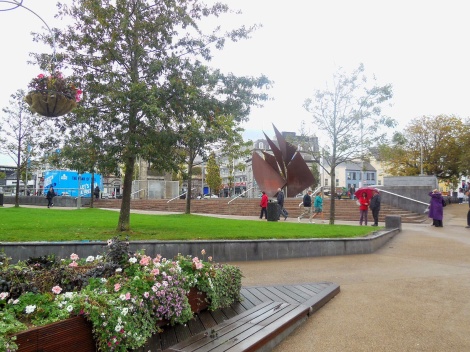 It would be easy to linger longer in Galway. The area is particularly known for it’s traditional Irish music and ‘Trad Night’s’ rotate around the bars in the city starting around nine PM – when whichever football match is on TV is done. We sat in on an open mike evening and after hearing a local sing a song he’d written himself called ‘I am Celiac’ I’m convinced the Irish can find poetry in anything. Or perhaps it was a thinly-veiled promotion of the gluten-free menu at McCambridges.

But we are off again tomorrow. We came to Galway for it’s proximity to the towering Cliffs of Moher where we expect to scare ourselves half to death. Stay tuned!