We are in the tiny burg of Napier, New Zealand – sister city to Victoria, BC in Canada. It’s an interesting pairing. Victoria is considered to be one of the geographic areas in Canada most at risk to damage by earthquake. Napier was completely demolished by a magnitude 7.8 earthquake in 1931. Not only was the city completely rebuilt after the quake but they gained some 4,000 hectares in new real estate pushed up by the force of the quake.

The tides and sheer size of the ship required some creativity here, where we actually backed into our berth. The Voyager is easily maneuverable enough to manage this on its own but the Port of Napier was taking no chances with a ship this size so these cute ship-berthing tugs were on hand as backup.

We towered over the Orion – a 106 passenger ‘adventure expedition’ cruise ship that does high-end, exclusive tours mostly in the South Pacific.

Believe it or not, these acres of lumber are destined for China where they will be shredded to make paper. I have a hard time with the idea of these once-spectacular trees feeding the paper machine – especially in this age of technology. Call me a tree hugger but you can’t grow up in the rain forests of Canada’s West Coast without having serious respect for the importance of magnificent trees to our existence. 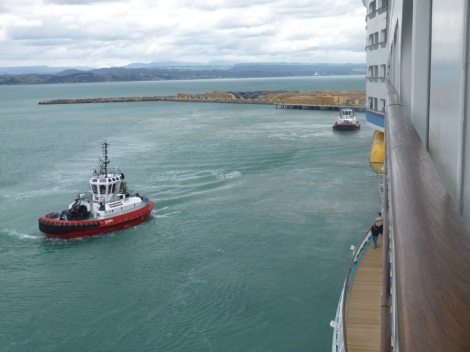 The town of Napier and harbor lined with Norfolk Island pines. 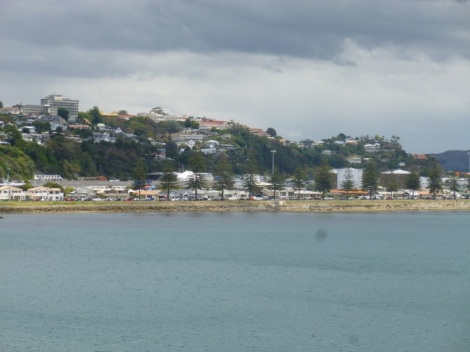 When Napier was given the opportunity to reinvent itself after The Great Quake, they chose to do so in the art deco style that was so popular in the thirties. A good move, as it turns out as the town now successfully promotes itself as the ‘Art Deco Capital of the World’. 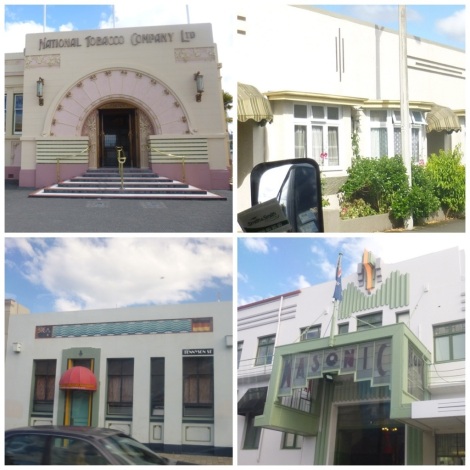 Billed as the oldest winery in New Zealand, The Mission was established as a Marist order and the priests began making sacramental and table wines in 1851. Flooding in 1880 suggested that a new location would be prudent so The Mission was moved to it’s present location. Then in 1931, a day after students moved into a new building on the site, the earthquake struck. A priest and seven of the newly installed students died. The surviving students helped to restore the damaged mission.

The seminary was moved to Auckland in 1991 so today the property includes the estate winery, cellar door, restaurant and a large outdoor amphitheater for concerts by folks like Rod Stewart, Carol King and Barry Gibb. 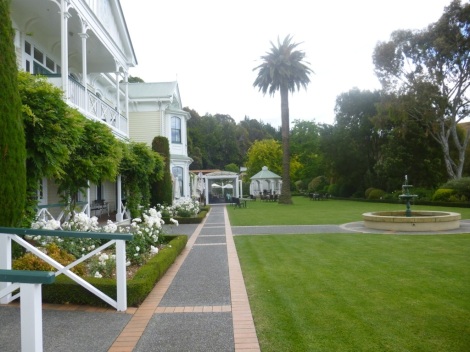 Some of The Mission’s many award winning vintages.

We passed the Napier Golf Course on our way to stop by a local chocolatier. The most notable feature of the course are the six large wooden carvings along the 9th fairway. Men can get an annual membership at this club for $956 but women pay $961. Hmmm.

I took a small group tour of Napier and was very glad when our driver decided to ‘go rogue’ and take the ten or so of us up the narrow road to Te Mata Peak. The views of Hawkes Bay and the townships of Hastings and Napier are spectacular. And in every direction there are miles and miles of the gorgeous, green hills of New Zealand dotted with sheep. Just stunning. 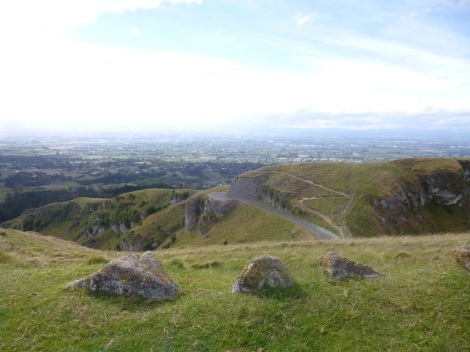 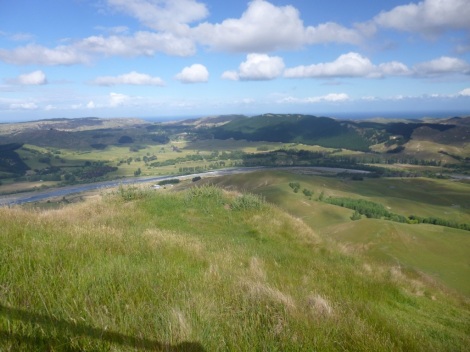 A clever mosaic at the top of Te Mata peak depicting the geography of the region.

I think I’ll include this gorgeous property on my list of potential retirement spots. I really like the idea of sheep in the back garden. 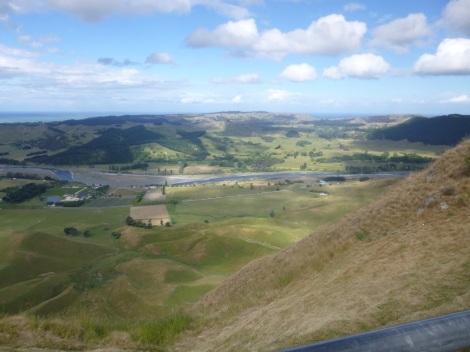 A last look at Napier’s art deco as we headed back to the ship.

This is also our last look at the North Island of New Zealand. We will be at sea for the next day as we bypass Christchurch and Wellington to make for Dunedin, at the southeastern end of the South Island. I’m disappointed to miss seeing Wellington, which was listed as a port-of-call when I initially booked the cruise but they are undergoing dock repairs – or perhaps not able to accommodate a ship of our size? Ah well.

My next post will be from The Land of the Ring. I’m excited to write about my two days crossing New Zealand by land through the luscious countryside where the Lord of the Ring movies were filmed…. and the adventures we had meeting up with the Voyager in the fjordlands. Stay tuned!